Whew. Craft Con was a blast. We are slowly posting wrap-ups and ongoing information on the website, still working out what happens next. Upcoming is Maker Faire, where Autumn (one of my main honchos on the project) is going to be presenting the Crafting Green information she shared at Craft Con. Since she's coming back, Lz and EJ (the weebley force behind Your Mom's from the Pittsburgh area) are too so we're going to represent Craft Con at Maker Faire, tabling and even I believe presenting onstage about the project. Maker Faire is May 3 and 4 and I hope to see you there, either when I am wearing my Craft Con hat or when I switch to Pandora's Trunk organizer. Whew.

Meanwhile, this weekend I am taking part in Alchemy, sure to be a rockin good time.

San Francisco – Activity erupted the floor of the Stock Exchange and the Artsy Index soared as False Profit, LLC and Missing Piece announced the second incarnation of Alchemy. This flood of activity, however, was not the usual buying and selling.

Several men in business casual were spotted making origami while a large circle of traders watched a walk-off between representatives from several Fortune 500s. Easels sprouted up in the atrium while fortunes built on towers of Legos rose and fell. One bewildered Exchange administrator was heard shouting, "Ok. Who here brought the arc welder?!" It was the most activity the Exchange has ever seen.

"My mind is melting like a Dali clock," observed one trader, overwhelmed by the unprecedented rise in the Artsy Index. "So I guess that's what I'll be painting at Alchemy."

When asked to describe Alchemy, Stephanie Tholand, Lead Structural Engineer at False Profit, LLC offered this explanation: "It's really a collaboration built atop a series of collaborations which are themselves collaborations. I assure you, it's quite unstable and vulnerable to unexpected quakes of artistry."

Some people are indeed expecting the unexpected: "I've heard the Missing Piece fashion show is basically magic," said an anonymous source from deep within the fashion industry.

Both False Profit, LLC and Missing Piece declined to comment on the details of Alchemy, citing the impossibility of predicting what the attendees will do.

Alchemy, an interactive art event, is commencing on April 26th at
CELLspace in San Francisco and a great flurry of artiness is expected.

We're over budget (hellloooo, credit cards), I've been sleeping 4 hours a night, it's too late for me to get my dry cleaning done, and I think I've already committed to doing this again next year. Am I crazy? Probably. Come see! 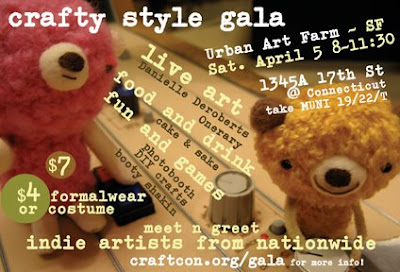 Meet n Greet indie artists from nationwide
Savvy indie artists and artisans from all over the country are visiting in town to attend Craft Con, http://craftcon.org, a business development conference for the craft community. The Crafty Style Gala is an opportunity for San Francisco's unique local arts scene to meet the nationwide leaders of the recent craft resurgence and show them what is unique about our culture!
http://craftcon.org/gala
at 12:39 PM No comments:

Medium Reality
San Francisco, California
Medium Reality concentrates on sustainable design/production and grassroots everything. All of reality is the medium at hand for this cutting-edge studio. You are hearing the voice of Rachel Lyra Hospodar.